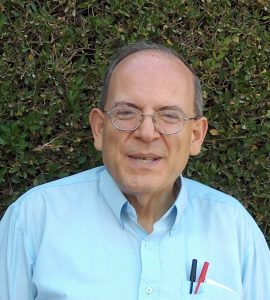 Chaim (Harold R.) Cohen (1947-2017) taught in the Department of Bible and Ancient Near Eastern Studies and the Department of Hebrew Language at Ben-Gurion University of the Negev, Israel, beginning in 1984. He became a Full Professor in 2011 and Professor Emeritus in 2014. He earned his Ph.D. in Ancient Semitic Languages and Cultures at Columbia University in 1975, after earning an M.A. in Bible at the Jewish Theological Seminary in 1972, both in New York where he was born.

Cohen was a world-renowned biblical linguist. He was known in Semitic lexicography for his insistence on the primacy of semantic equivalence over etymology in determining the meaning of rare words. He studied biblical Hebrew in the light of Akkadian and Ugaritic, two ancient languages that have not been spoken for about 3,000 years. The clay tablets on which they were written have survived much longer than the parchment (animal skin) on which Hebrew was often written. He used comparative philology to decipher precise meanings in both of his books, Biblical Hapax Legomena in the Light of Akkadian and Ugaritic (1978) and The Ugaritic Hippiatric Texts: A Critical Edition (1983). When he died at age 70, he was working on five more books, but he had already published well over 100 entries in encyclopedias and dictionaries.

The Bible was much more than a vocation for Chaim. It was the very essence of his life. Not only did he study, teach and research the Bible, but he literally sang it. He was a highly skilled and greatly admired Torah Reader. From early in life to the end, Chaim taught the cantillation of the Hebrew Bible to all ages. In fact, one rabbi remarked that no less important than Chaim’s published scholarship were the many people whom he trained to be Torah Readers around the world. He also worked on a volunteer basis as a marriage counselor, assisting troubled couples for over 20 years.

“May Chaim Cohen’s memory be a blessing, and may his wonderful library inspire scholars from around the world to emulate his deep devotion to the idea that truth in matters both great and small is a matter of provable fact and not a matter of opinion that can be negotiated and bartered.”

-Adapted from a tribute written by Rabbi Mayer I. Gruber

Your ticket for the: Chaim Cohen Collection