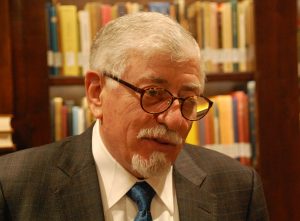 Heretical Rabbis of the Talmud: 2nd Century Witnesses to the Power of Yeshua’s Gospel

Joseph Shulam, a trained orthodox rabbi and leader of the messianic congregation Netivyah , will explain the ancient Jewish document called “the Talmud.” He will invite us inside that ancient text to introduce us to some of the famous early rabbis who were branded as “heretics.” Join us as Joseph tells inspiring stories of these “heretical rabbis” who put their trust in Jesus, and how some of the earliest Jewish rabbis were won to Jesus as Lord and Messiah. Then lean in as Joseph closes by telling some of the amazing conversions of modern-day rabbis happening in Israel and around the Jewish world.

Joseph Shulam is a Hebrew Scholar and Christian Minister in Jerusalem.

Your ticket for the: February 8, 2020 Lecture by Joseph Shulam