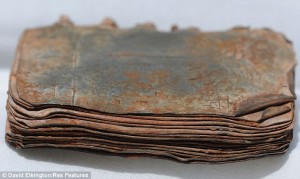 Did you see the news reports this week? Copies of news reports were sent me from the Middle East, the Far East, and even the Midwest! The big news? Some codices (early version of a book) made of lead have been brought to light in Jordan/Israel. The Internet headlines call out:

The little that is known of these relics so far gives an indication they might date to the first few decades after the church started. They seem to be written in some code, but at least one Biblical scholar who has seen them opined,

“The relics feature signs that early Christians would have interpreted as indicating Jesus, shown side-by-side with others they would have regarded as representing the presence of God.”[4]

These small, credit-card sized books have a long road before they serve us in understanding Biblical history and the history of our faith. They must be placed in safekeeping, be authenticated, and then be translated/interpreted. Until then, we will likely get glimpses that are exciting, and open to widely divergent interpretation.

We should add that a key person involved in trying to determine whether these are authentic and whether they will be returned to authorities is Dr. Weston Fields. Just yesterday Dr. Fields was discussing the codices with the Bedouin who currently has possession. Dr. Fields will be in our library speaking on April 16 and will no doubt be discussing these as well.

Your ticket for the: 70 Tiny Books: Major discovery for Christianity?